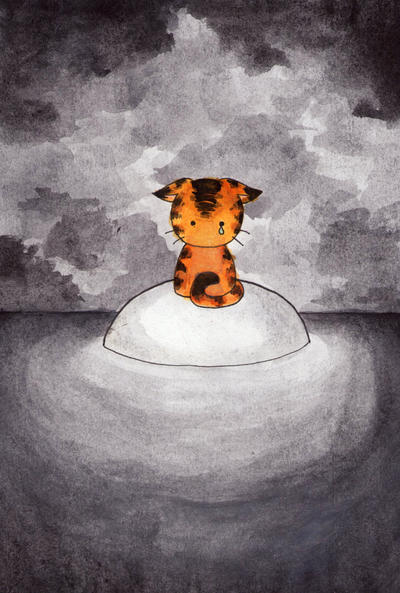 I walked out this morning for a cigarette and I saw the robins, the ones building their second nest of the season, perched on the twisted dead limbs of the old lilac bush. They are efficient parents, both so diligent and present. What would it be like if one of them were to suffer in some way some with, say, emotions arising from awareness of how fucked they are. There’s so much they can’t control. But they don’t appear to suffer and so they are able to build a nest, mate, tend their eggs and then care for their young, all without worry that they’ll lose two out of the three or four of their fledglings to predators, falls or starvation.

Then I thought of captive mother tigers I’ve heard of who refuse to care for their newborn cubs. I imagined that it’s because life in captivity makes them miserable, even to the point of preferring to die or let their cubs die. I’m like one of those tigers but I also can’t give up and abandon my children. The cause of my misery is my past trauma and it is also what drives me to not give up. It is the source for 70% of what I think, feel and interpret experience.

It’s hard to comprehend how deeply and in how many complex ways trauma affects a person. You have to be someone with trauma who has done a lot of work to become aware or someone trained in trauma who really only understands it as a concept. The process of trauma work reveals the complexity: insidious negative thoughts and beliefs about self and the world, the multitude of ways in which the body holds harm done, the various reasons relationships are so challenging, even a sense that the soul itself is struggling to survive within a mind and body which witnessed or bore the brunt of violence perpetrated by another human being, or sometimes an event. Even as someone living it, it’s mind boggling. Oftentimes, it’s hard for me to truly relate to someone who hasn’t been through it because it feels impossible that they would be able to understand how much pain I’m in, how hard I work to recover, and the cold fact that there is no going back to life before trauma. It’s possible to learn skills which allow the survivor to mitigate the trauma, but the trauma will always be part of who they are.

The traumas I’ve experienced will always be part of who I am.

And that is where that captive tiger is screwed. She will never have the freedom to recover, even if she is lucky enough to be returned to a wilderness in which she is protected. Could she ever process the terror of being held captive and forced to live in a forty by sixty foot box? I understand why she can’t take care of her cubs. She is using every ounce of her energy trying to survive. She has nothing left to give.